As early June 1st, it seemed the 2019/2020 Billiken Men’s basketball roster was complete as could be. A strong freshmen class, in addition to two graduate transfers both of whom are St. Louis natives, being brought in to supplement the current roster highlighted by Jordan Goodwin, Hasahn French, and Fred Thatch Jr.

Then June 2nd comes and all of a sudden, arguably the most notable get for Travis Ford’s Billikens is no more. There is a cloud of mystery as to why Mike Lewis II is no longer part of the future, the reality of the situation remains the same. The Bills are now much younger, much less experienced, and now much less likely to break out and repeat as A10 Champions. All that being said, the odds were already stacked against “Team Blue” and it wasn’t as if Lewis was the ultimate key to championship success, but he certainly was a luxury they really could have used.

For about a month it seemed that all there was to do now was wait for the season to start. The freshmen moved into the dorms, summer workouts began, the NBA draft came and went with two Billikens getting NBA opportunities (Congrats Javon and Tramaine), and SLU basketball hosted two rounds of youth summer camps on campus.

There were hints of Ford and the staff working on finding a “replacement” graduate transfer. Alabama Grad Tevin Mack had plans to visit SLU but ultimately signed with Clemson, never making it north for a visit. Coach Ford has rightfully earned the reputation of an excellent host for players visiting SLU. More times than not in Ford’s tenure at SLU a recruit has come to come to campus and left having signed or signed immediately after leaving. So, Mack not even making an appearance on campus seemed like a missed opportunity.

So, when rumours of Eastern Kentucky University point guard Tay Weaver would on campus for a visit, Billiken fans were justified in figuring there was a strong likelihood they may see Weaver in Blue and White.

It appears they had good reason to be optimistic. On the morning of June 30th Tay Weaver added the official Billiken social media account handles to his social media bios. 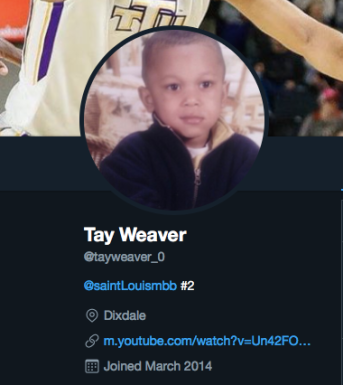 There has yet to be an official announcement from the SLU Athletics, but it is hard to see how this is not a clear sign of his commitment to the program.

So, what should Billiken fans be expecting? Where does Tay fit in the rotation?

Dujuanta “Tay” Weaver is a 5’11” point guard who hails from Louisville, Kentucky. He played his first three seasons at Eastern Kentucky. He spent four total years at EKU but was forced to take a redshirt his sophomore season due to a knee injury. Since that injury, he has started 35 of 41 games for the Colonels. Weaver profiles as a shooting point guard, who has made his name as a perimeter shooter averaging 7.9 three-point attempts per game on just 9.3 field goal attempts per game. He was second in the Ohio Valley Conference last season in made threes, making 50 in conference play.

The Louisville native has reported receiving as many as two other offers from major programs, Arizona and New Mexico. It has been indicated proximity to home may be a key factor in picking SLU with Louisville only being 5 hours away.

Tay primarily works offensively as a catch and shoot perimeter player who can hit from NBA range. He has shown the ability to take slower defenders off the dribble but only made 16 field goals from inside the arch in the 2018-19 season. He is a high-volume shooter who gets his shot off quickly and will often time shoot over sagging defenders but is most lethal when coming off a screen. When Tay does find himself in the paint or underneath the basket, he has proved he has the passing skills and vision to create opportunities for teammates.

As an undersized guard, coming in at just under six feet tall, his defensive versatility is limited. His lateral quickness and active hands make up for that in part averaging 1.2 steals per game last season. While he won’t be the defensive star of Chaifetz Arena, he is by no means a liability on that end of the floor.

At the very worst, Tay provides the Billikens with ​a reliable shooter who will create floor spacing for everyone. He is a very low risk, high reward type of addition to a roster in need of shooting and proven scoring talent.

Last season for the EKU Colonels Weaver averaged just under 30 minutes a game so he has the ability and experience to be a full-time guard, however, I just can’t see that being the case with the roster the Billikens have moving forward.

The 2019/2020 Billikens out what is likely the deepest group of talent Travis Ford has had in his tenure at SLU. With as many as six guards all deserving a shot at playing time, it’s hard to see anyone guy playing 75% of minutes at a guard position. Jordan Goodwin, Fred Thatch Jr, Yuri Collins, Gibson Jimerson, and Demarius Jacobs all have claims to playing time (some more than others). A committee of players will likely contribute at different times of the year. But with as many injuries concerns the Bills faced last year, compounded by only truly trusting seven players total having depth like this is likely feels like a good problem to have for the coaching staff.

Carter Chapley is a sports writer and reporter. He most recently was a the lead SLU Athletics Beat writer at ScoopswithDanny Mac.com. Prior to that he was a Staff Writer for the University News at Saint Louis University in Missouri covering the SLU Billikens as well as contributor to the entertainment section.

Along with covering sports news, Carter is a passionate consumer and commentator for all things pop culture. Follow him on Twitter @ChapleyMedia and on Instagram @CarterChapleyMedia